Morning Stampers! Many thanks for all your entries last week... it was grand to see so many new peeps joining in with the challenge. This week the theme is... MOVIES... so you can include a movie theme, your fave film, a soundtrack to a movie, tickets... the list is endless! To join in all you need to do is make a piece of art... include some stamping and the theme... then leave a comment here for me with a linky to the place you are showing your entry... then I can hop on over to see you. So, this week... Movies... I mean, come on, why haven't I thought of this theme before??? And... there are loads of songs with movies in the title but I chose this one cos it reminds me of when I was a nipper, nowt but a gal, listening to Saville's Travels on the radio on a Sunday... ah, happy days! 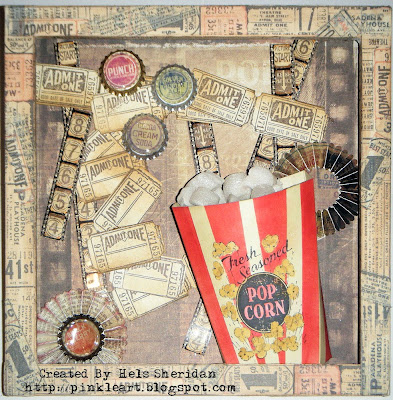 I have altered a 9" square wooden shadow box... erm, I forgot to take a pic of it before... but it had an acrylic "glass" across the front, so I bashed that with my new hammer that Grim got for me... it is a girly sized one and is pink... and it works! I managed to bash the acrylic out without breaking the frame or bopping myself on the head. I covered the frame with Tissue Tape - this is fab cos it is all movie and ticket themed... then I whacked a bit of Latte Alcohol Ink over it to blend it in. 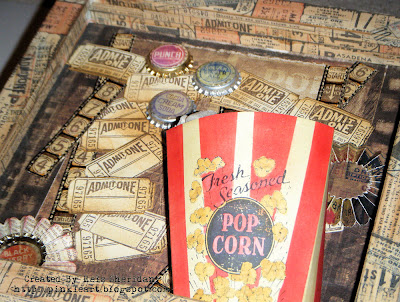 The back of the shadow box has a piece of paper cut from the Lost & Found stack which I then added some tickets that had been cut with the Ticket Alterations Die... and stamped with two different Ticket stamps from the Duke of Distress. I added the Film Strip which had the film stamp image stuck to it... and then altered some bottlecaps... which I popped a few bottle cap images onto (also from the Lost & Found stack). So... what do I HAVE to have at the movies??? POPCORN! And... Tim has this popcorn stamp... which got me thinking, popcorn comes in little boxy packets... and I remember seeing Lori made a popcorn box a while ago... so I thought I would have a little go... this is the most involved bit of stamping I have done for yonks...*I am awarding myself double points for this.. and it makes up for last weeks lack of stamping LOL* 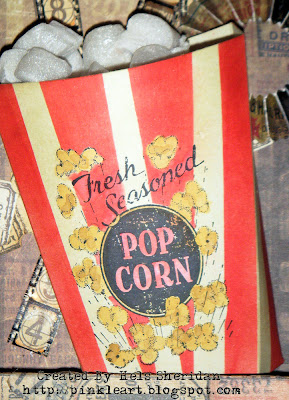 I fashioned a little packet from white cardstock and stamped the image in the middle of the front. I masked this off and coloured the piece with Old Paper DI. I then cut some strips of paper and used these as masks... and then inked over them with Barn Door DI - when I lifted them off I got the stripey look. I used a waterbrush to add some colour to the popcorn and fill in the gaps of red. 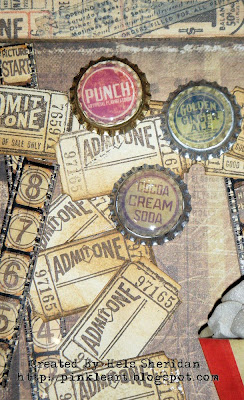 Of course the box now needed popcorn... have we any in the house??? NOPE! I did have some that my Lush stuff had been packed in but I couldn't find it... so I improvised with polystyrene packing stuff... you know, the S shaped stuff that gets everywhere??? Well... this is where I nearly poisoned myself... because... the "popcorn" was falling out of the box... and I wanted it to stay put, so I tried Sticky Dots, nope, wouldn't stick... so, I tried Glossy Accents... nope, wouldn't stick... so I thought.. .aha! I will use Superglue... erm... I had glued a few... and all of a sudden I noticed this smoke wafting from the box of "popcorn"... and then a weird smell... I had set off a chemical reaction and the glue was melting the "popcorn"... oooops ROFL ... needless to say, I stopped that straight away and just stuffed the all into the box so hopefully they won't fall out now LOL Don't worry though... the noxious fumes haven't affected me... I am still as insane as ever! Anyways... enough of my wafflings... thanks for looking... have a goodly day and... TTFN

Oh my goodness Hels that could have been really nasty and thanks for the warning. Your creation again is fab and I see you sneeked that rosette in there as well.... Take care and enjoy the weekend, Annette x

OH MY WOW!!! This is amazing!!! That popcorn box is totally over the top COOL.... you deserve *triple* points for that!!! You've set the bar very high for us mere mortals this week... whatever will I do??? Must ponder... Awesome job as always, hon. Hugs, Els. xx

What a neat shadow box! And to create your own popcorn box...my hat is off to you, girlfriend!

Fantastic shadowbox and what a neat popcorn box. Awesome!

Here is my entry.

oh my gosh, that must have been quite a little surprise! your popcorn is smokin hot!!!! and so is your canvas! cool beans Hels!

Great theme, great box.. see I am going to have to get my thinking cap on! As for the gluing.. it is a definite NO NO.. I need my girl.. and hospital is not a good place! I am popping popcorn into the post as I write :)) do you like the pun?? lol
Have a great day
hugs x

Wow. What would we do without you to work out that polystyrene reacts with superglue - now we can all avoid that combination!
Love your piece today, the popcorn box itself is fab. Not at all sure what I will conjure up for this yet.... I may be back!!

only you Hels could satrt a chemical reaction and a near explosion (well there might have been one as popcorn kind of explodes)making art....whick I hasten to add is superb.
have agreat Sunday
hugs

O M G !!!!
Wow what an unique piece of art. This is amazing. Love the popcorn idea. Absolutely stunning. I love it hun.

Polystyrene is nasty stuff and can set on fire so glad you stopped when you did. I can just imagine you sitting there with flames all around you wondering which bit of craft stash to save first!!LOL Having a sweet tooth doesn't always work. Love the finished frame for all that.
Luv Joanne xx

this is fantastic Hels, I love theat tape you covered the frame with and lol at the popcorn saga x

Crikey Hels... that's a lotta work on a project! It looks fabulous and I am now convinced I need to buy some of Tim's tape... it'll be fantabulous on journals, etc.!!

Haven't created for you yet, but I'm bound to! Laters!! xx

Love it Hels! Isn't that Lost and Found paper awesome? So many ideas. Love your popcorn box, turned out even better than mine! lol! Glad you didn't pass out from the noxious fumes dear. lol! You get yourself in more trouble..... roflmao.....

Awwwww, this is just darling! Did sound like a lot of work, but well worth it I can assure you. The popcorn box looks very realistic. I can just smell the popcorn now!

This is gorgeous, Hels. I'm playing along this week by accident again... and I may be cheating, lol here is my entry.

My oh my what a wonderful piece. This really puts chemistry to the test! (catch the pun on the melting popcorn?) You must have had a ball with this. I love it!

Great idea for SS, and this is a fabulous piece Hels. That tissue tape works brilliantly, and I love the tub of popcorn = FaB!!

The project is brilliant, nonetheless! Love it all. Don't be tempted to eat the popcorn though. Then you would really go crazy.

Fabby job all round! Love it.

And who says art isn't an adventure? Love everything on your brilliant shadowbox--including the popcorn!
Here's my entry:
http://2amscrapper.blogspot.com/2010/09/post-card-from-paris.html

Great creation. You have set me off on a little reminiscing, my project's here.

Liking your art this week especially the popcorn box. Here's my entry: http://wavesofcreativity.blogspot.com/2010/09/colour-purple.html

Love your project Hels...and here is my one which is a wrong-way round notebook with a movie feel:

This a great theme - so much to choose from! Another lovely piece - maybe you go on tour so we can all have you for one afternoon. A new twist on a personal trainer and a lot more fun! take care.

Here is my entry:
http://blueboxbabe.blogspot.com/2010/09/what-happened-to-weekend-and-sunday.html

Alrighty! Thought of something! Here's my entry!

Sort of had some inspiration tonight. It is here

Another fabulous project. Your work is incredible. My humble submission can be found here:
http://magicdelights.blogspot.com/2010/09/movie-night.html

Fabulous project Hels and glad to hear you survived the gluey incident intact.
Managed to make something for the first time in ages and you will find it at
http://stamperschef.blogspot.com/2010/09/movie-queen.html
xx
PS: Weird post above mine!
PPS: Off to Ally Pally on Sunday - yippee!

Have removed the weird post about Fliss's... twas a spammer :O(

Just found time to join in. Hope you like my experiment? Hope Ali Pally is going ok!

Sorry have not remembered yet how to do the link properly and John is hovering over me to go out!
So here is the link.

I have a GF who is converting her Den to a movie theme - she'll go crazy over this... Wonderful piece Hels! 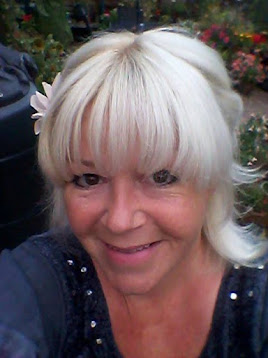 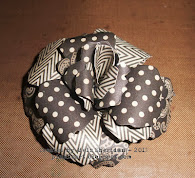 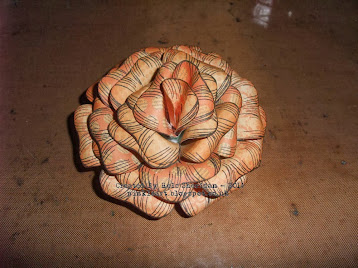 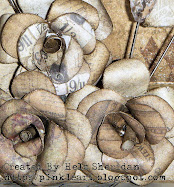